Rückblick:
Challenges for Environmental Journalism in China and Germany 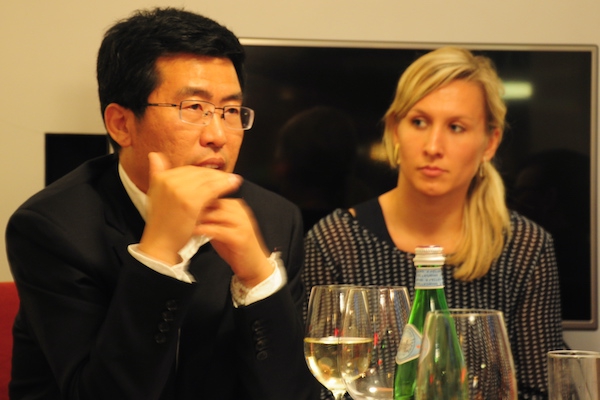 LIU Jianqiang, Beijing editor of chinadialogue, a website focusing on China and environmental issues. He was a senior investigative reporter for the Guangzhou-based newspaper 南⽅方周末 (Southern Weekly).

Bernhard PÖTTER, editor at the “Economy and Ecology” department of the Berlin-based daily newspaper taz – die tageszeitung. His books include “Ausweg Öko-Diktatur?” (“Solution Eco-Dictatorship?”) and “Stromwechsel” (“Change of Energy”).

Katharina FINKE, German investigative journalist who is covering stories around the world. Her work concentrates on culture, travel, sustainability and society with a focus on social and gender issues.


The discussion evening in Berlin was attended by some special guests: a delegation of outstanding Chinese environmental journalists who were in Germany to participate in a one-week media tour at the invitation of the German Ministry of Foreign Affairs. Some of the journalists were winners of the 2014 China Environmental Press Awards which is organised by chinadialogue, The Guardian, Netease New Media Center and Renmin University.

“One of the participants of our delegation took a photo of the sky right after the landing in Berlin”, Liu Jianqiang told. “She said this would look like a Beijing dream to her.” Liu explained that while the environmental situation in China has worsened rapidly in the past decade, on the positive side both the ecology movement and environmental journalism have gained momentum. Social media, blogs and citizen journalism have contributed significantly to this. “It’s quite easy for the Chinese central government to control traditional media. But new media have opened up new possibilities.”

An example was given by one of the participants of the Chinese journalists’ delegation: “After the US embassy had started to publish the results of its Beijing air quality monitoring online and issued warnings about serious health hazards a Weibo wave started – Chinese netizens picked up and spread the information. Then the local government couldn’t any longer sell the grey sky to the people as blue one.”

From Liu’s view this development is a sign for a recovery of the Chinese society: “Before 4th June 1989 there were protest movements, the one against the construction of the Three Gorges Dam being the most significant one. With the Tiananmen crackdown the big protest movements in China went silent – including the ones concerned about environmental issues. From this day on people were scared. The government could do whatever they liked, not only regarding the Three Gorges Dam.” This has changed gradually in recent years. People are finding their voice again, they express their discontent with environmental sins which often come along with corruption.

The biggest threat for a balanced environmental journalism in Germany, according to Bernhard Pötter, is not governmental pressure but “the highly sophisticated lobbying instruments of companies, business associations – and also environmental NGOs”. Another big problem he sees in the dependency of most German media outlets on advertisement revenues which makes them vulnerable to the huge financial power e.g. of car producers or chemical companies.

Pötter said that China today reminded him of Germany in the 60s and 70s: “It’s true that today we do have a mostly blue sky in Germany, but it was a long way to get there, a long struggle. Before the eco-movement in Europe our governments weren’t keen either to provide any information regarding pollution to the public.” Pötter argued that the ‘green image’ which Germany enjoys in the world today is only partially justified: “We have found solutions to some problems. But you also shouldn’t forget that Germany exported some of its problems to other countries. Some of the environmental problems in China actually should be our problems, in Germany, because they are directly related to our consumption.”

There’s another questionable export article according to Pötter: a cultural pattern. “If more and more people in other parts of the world are adapting the ‘Western’ way of life, this could end up in a true disaster. I’ve never seen as many Porsche and Audi cars as in Beijing’s Sanlitun district.” What if everyone, in China and in every corner of the world, would dream of such a car – and would be able to make this dream come true?

<< Rückblick:
The Africa of German, Chinese and African Media