Rückblick:
Fall of the Berlin Wall – 25 Years after 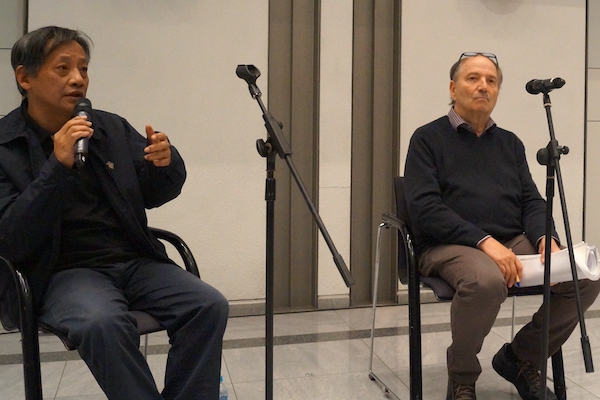 
On 9th November 2014, exactly 25 years after the Berlin wall collapsed, the German-Chinese Media Network presented a discussion about the fall of the Berlin Wall at the German Embassy in Beijing. The discussion was part of an anniversary event that also included the screening of the documentary „Zug in die Freiheit“ („Train into Freedom“) about 5000 East German refugees who managed to escape to West Germany shortly before the wall collapsed. The discussion, which has been attended by more than 150 people, was moderated by Wang Ge, a researcher for German Philosophy at the Chinese Academy of Social Sciences (CASS).

Johnny Erling, who at the time of the fall of the Berlin Wall 1989, was in China recalled that the people in Beijing did not know immediately what happened in Berlin. This was due to the time difference and the absence of real-time media like the Internet, of course. But also because the Chinese authorities decided to remain silent about this event for another 20 days after the collapse of the wall, until 30th November 1989. The foreign ministry just explained that the whole matter was „too complex“. The complexity and dynamics were also beyond imagination for most people and politicians in Germany, Erling added. After the collapse of the wall they did not anticipate either what would happen next. They did not expect that the two German nations would reunify within such a short a time – less than a year.

From 1990 Erling worked in Hannover as Germany correspondent. He did many interviews about the life of the families in East Germany. He found that although the socialism concept of East Germany at that time sounded great and the economy looked to be in a decent condition at first sight,under the surface there were many problems lingering. The East Germans adopted the West German currency, and after that many products were hardly affordable anymore to the East Germans. Tens of thousands of people lost their jobs. And very quickly, the two countries were reunified. With a lot of investment into advanced education and modernisation in the „new“ Eastern German states, there soon wasn‘t so much difference in the appearance of both parts anymore, Erling said. But in some ways the Berlin Wall remained as a wall in the mind of people even in this reunified Germany as a whole. 25 years have passed, so it would be only a problem of time. As a conclusion, Erling evaluated that despite many problems and drawbacks that had and have to be overcome by now the process of reunification has proved to be smooth and peaceful. 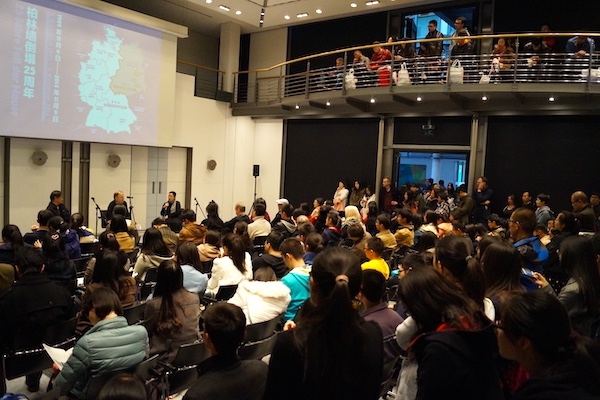 Wang Xiaolong explained that in the opinion of the Chinese people the Berlin Wall back than was something like another Great Wall. So it was hard to believe about the collapse of the Berlin Wall in one single night. There are too many contributing factors which explain why happened what happened in November 1989. But Wang believes that one of the main driving forces behind the great change in Eastern Europe and the Soviet Union at that time may be attributed to the lack of the improvement of the peoples’ life in those countries. And the lesson learned from this has been the leading concept for the policy and reforms in China in the past 25 years, until now. Wang also remembered his various interviews in 1997 in Berlin, the year many German agencies and organizations moved from Bonn to Berlin. He saw that still, seven years after the reunification, many buildings in East Germany remained unchanged, so he thought, though the Berlin wall does not exist anymore, it would remain in the minds of the people.

During an interview with the Ex-President of Germany Wang saw a collage which combined many pictures including the portrait of Lenin, and he thought that this is emblematic for the situation of Berlin itself: It was a city with an extremely diverse and mixed society, where different ideologies of different times could co-exist in harmony, in a way that some kind of balance can be reached. At that time he also met the girlfriend of his translator who came from Eastern Europe. Her ambivalent perspective on the huge political and social changes she has experienced impressed him much. „The reunification and its changes bring more chances to the youth“, she said. „But it is not fair for the old people.”

Wang was wondering whether, after 25 years, these changes really have brought more opportunities to the young people or if it is quite the contrary. But he admires how the German people have managed to get over a long-lasting separation and to integrate two countries with very different systems into one single nation again quite smoothly. People on the whole keep calm and cope with problems when there are some. This is an achievement which, according to Wang, should be more widely acknowledged in China.