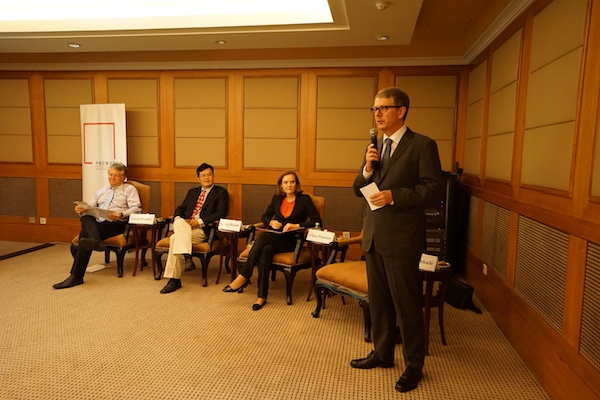 Jörg WUTTKE, President of the European Union Chamber of Commerce in China

JIANG Shixue, Deputy Director of the Institute of European Studies at the Chinese Academy of Social Sciences

Clare PEARSON, Chair of the British Chamber of Commerce in China

Achim SCHKADE, Head of the Press and Communication Department at the German Embassy in Beijing


On 11th August 2016 the 13th event of lecture and discussion series “Same same or different?” took place in St. Regis Hotel in Beijing. More than 60 Chinese, British and German guests – mainly journalists, students, researchers and staff from chambers of commerce and embassies – attended the discussion in which Jörg Wuttke, Jiang Shixue and Clare Pearson talked about the causes, the impact and the consequences of the Brexit from EU, China and UK perspectives respectively. The discussion was moderated by Achim Schkade from the German Embassy in China.

Jiang Shixue mentioned in his opening statement that there are psychological, historical and economic factors for the Brexit which might differ from a “soft Brexit” (a reserved stance towards European integration like Norway or Switzerland) and a “hard Brexit” (no more relations with the EU). With regard to the consequences for the UK, Jiang predicted that its economy will suffer sooner or later. Its position on the global economic/political stage will be affected. The people’s living standards will be lowered. The British society is divided. Effects for the EU: It will be less powerful economically. The Brexit is a stumbling block for the European integration, a building block for a “two-speed Europe”, an encouragement for anti-establishment forces. “But a domino effect is unlikely”, Jiang emphasised.

According to Jiang, Germany and France will have a hard time, because Germany needs the UK to reduce France’s “independence” and France needs the UK to contain Germany’s superiority. He doubted if there will be a “German EU” after the Brexit in the future. Certainly it means more uncertainty for the world economy. The Brexit brings trade diversion for the EU but trade creation for China, which is not good for the process of RMB internationalisation, added Jiang, but “good for Chinese tourists and for parents who wish to send their kids to the UK”. Prime Minister Theresa May‘s attitude towards China-UK relations and concretely the Hinkley Point C nuclear plant in England – where one of the main stakeholders is the China General Nuclear Power Group (CGN) – are topics of much concern to the Chinese media and public. 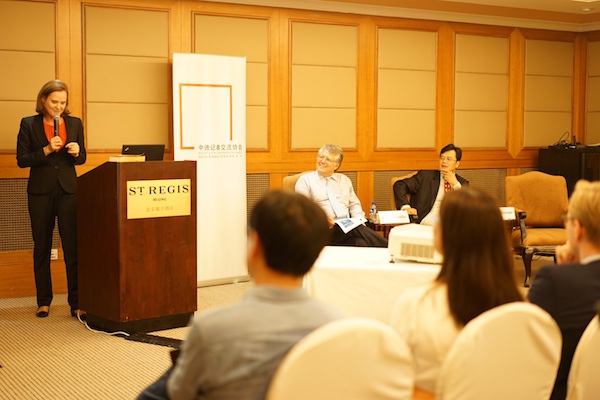 Clare Pearson pointed out that the Brexit is about the gap between the rich and the poor, and between the migrants and the locals. “I guarantee that this can occur to any country in the EU zone,” she said. The gap between rich and poor has been growing since the World Wars I and II. The Brexit occurred because the elite perverted the mind of the poor. It is about the upper class manipulating the lower class. The political culture needs to be restored. The power gap between the government and the business world has to be closed. Companies can and will adapt. “But in reality there is going to be a lot of hurt”, said Pearson, “it is a tragedy.” She thinks selfish politicians sacrificed the public interest for the cause of their personal affairs and their egos.

As possible ways out of this deadlock she mentioned events like this “Same same or different?” discussion evening: platforms for people from different backgrounds to discuss matters together. There is a need for engagement, Pearson is convinced. The Brexit is also pointing to a new type of leadership: “I wish Angela Merkel were my president”, she said. Democracy implies reforms.

With cartoons from his favourite publications, the Financial Times and The Economist, Jörg Wuttke expressed his analysis and opinions. He described the Brexit as the biggest crisis which the UK has been facing since 1945, and for the EU as a whole he said: “We sense a mortal danger to our whole organisation, to what we’ve established over the last years.” The EU was founded to secure peace, not just for economic convenience.

According to Wuttke the way the Brexit happened is a perfect storm: once every while, having so many streams of history and current developments – a global trend towards nationalism and populism, charisma, dangerous mid-term elections and a Labour Party led by a gentleman with no connection to the people, etc. – coming together, something that no one has foreseen is brought about.

However, after the Brexit vote the EU came up with strong statements in two cases: regarding the market economy status of China and regarding the South China Sea. The Brexit has not lead astray the EU in these cases. There is more solidarity than people expected. China always wants a free trade agreement (FTA) with the EU, the latter wants an investment agreement first. Now China might go to the UK first, but the UK must reconsider what leverage and what bargaining power it has, what it has to give except good will. So it will be difficult for the UK to get an FTA with China. 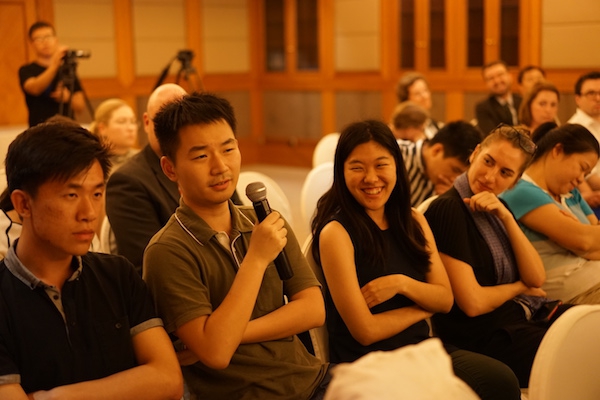 During the discussion, moderator Achim Schkade asked the speakers to talk about the UK’s previous efforts for the European integration and an outlook. Pearson commented that Great Britain is never going to fully integrate with Europe. “In Beijing you will meet British who want to integrate, but not at home”, she said. Wuttke said there are disintegration movements in other European countries like Austria, the Netherlands and France but concludes that, considering the continent’s urging problems like the Russia sanctions, Greece‘s debt crisis, or the many refugees due to the Syria crisis, EU is still doing okay, but is in need for a strong leadership. Jiang expects that without the UK the European integration might move ahead faster. China hopes that the bilateral relationships with the EU as well as with Great Britain will continue to move forward, no matter if, in the end,the UK is going to leave or not.

When Schkade asked about the state of the British stock market, which seemed to be recovering six weeks after the referendum, Wuttke joked that, compared with the Chinese stock market, it might still be a happy valley. Also, due to the devaluation of the British Pound, Great Britain has become very attractive right now for foreign investors with regard to property and company values. All speakers held a similar opinion: The stock market will recover, but the currency has already depreciated, the exchange rate has not stabilised, so it’s still a great loss. Pearson said that probably many Chinese are going to buy properties in Great Britain. Jiang believes that from the perspective of professional investors the UK will not be as sexy as before, but still one of the best places for Chinese investment due to its nice manufacturing capacity, infrastructure, legal system and financial system.

<< 回顾：
The Role, Influence and Power of the Media in Public Diplomacy